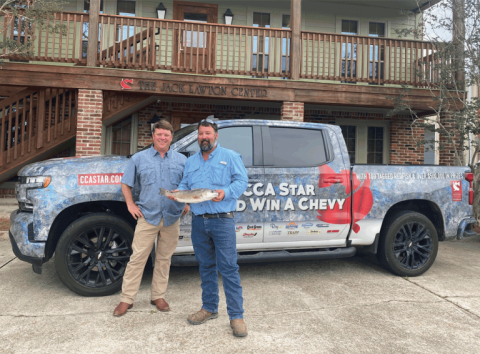 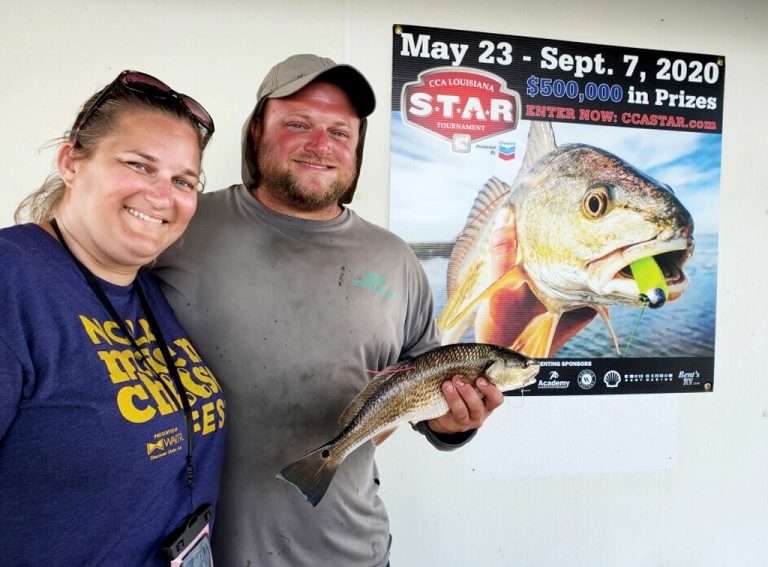 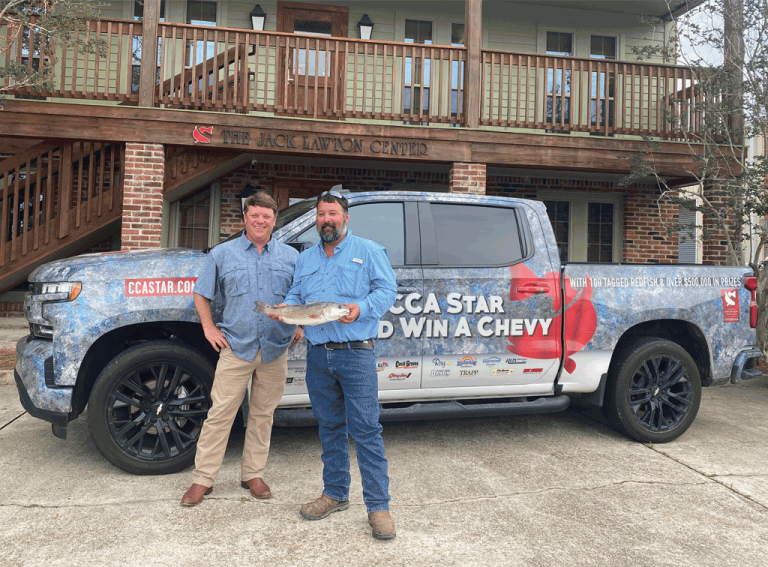 James Loup, of Lafitte, shows off his prize-winning tagged redfish while fishing the opening weekend of the CCA Louisiana STAR.
Lloyd Pickering, of Baton Rouge, brings his tagged redfish by the CCA Office for verification.

The CCA Louisiana Statewide Tournament and Angler’s Rodeo (STAR), presented by Chevron, kicked off its 26th year of competition early Saturday morning along the coast of Louisiana. In keeping with the start of STAR tournaments of the past, the first tagged redfish was caught opening weekend and so was the second!

On Saturday morning, James Loup checked his email and saw a STAR advertisement. As he put it, he “broke down and registered.” While he went to work for a few hours, his wife did some further research on the tournament and joined as well.  Late Saturday afternoon, they hit the water for a little crawfishing and red fishing. And that’s when it happened, James hooked the first of 100 tagged redfish of the 2020 STAR Tournament. James and his wife then headed to the new weigh station at Nick’s Marina in Lafitte where it was verified.

Pending further investigation and polygraph examination, his cast will net him a brand new Chevy Silverado donated by the Super Chevy Dealers of Acadiana, Baton Rouge and New Orleans.

“We are happy for James, who has been a faithful Ride the Bull participant for years, that he decided to sign up for STAR and it payed off,” said Rad Trascher, CCA Louisiana STAR Tournament Director.

On Monday evening, another first time STAR participant got lucky. Lloyd Pickering, of Baton Rouge, sought shelter during a mid-day rainstorm at Port Fourchon Marina. He asked Kat, who runs the marina, what tournaments are going on this summer and she said only one and handed him a STAR brochure. He decided to fill out the form and send it in. A few hours later Lloyd found a redfish with a red tag in it and quickly returned to the marina to show it to Kat and register it. The fish was then verified at the CCA office on Tuesday morning.

There was also a third tagged redfish caught from the bank in Leeville, this time by an unregistered angler.

Should the first two tagged fish hold up, the next three prizes are 195 NauticStar and Mercury Outboard boat packages and then the sixth prize thru the tenth prize are Gatortail boat, motor and trailer packages.

“Special thanks to the Super Chevy Dealers and Bent’s RV for providing such great prizes,” said STAR Chairman Snoop Roth. “And we still have a ton of other great prizes including the bonus prize money from Louisiana Sportsman Magazine, so don’t forget to become a subscriber.”

STAR offers over $500,000 in prizes and lasts until Labor Day, September 7, 2020.  The tournament spans the entire Louisiana coasts and has over 25 divisions. So there are still plenty of reasons and time to sign up.

“I am so excited!” Loup said. “If you are not a member or signed up for the CCA, please do so, it’s a great program that helps protect our favorite pastime.”

Registration for the tournament is only $35 and you have to be a CCA member to participate. To register as well as see a complete list of divisions, weigh stations, sponsors and rules, visit CCASTAR.com.

Do I have to be a member of CCA to fish the tournament?

When will I receive my membership card?

It can take up to 6 weeks to receive your card due to the overwhelming response in a short time frame. If you register online, you can now print your membership card at home until your card comes in from the national office.
NOTE:  You do not have to have your card to fish, weigh-in or win the tournament.

At all Weigh Stations or register online at CCASTAR.com.

If I work for a STAR Tournament sponsor am I eligible to fish?

What if my child catches a tagged red?

All youth participants are eligible to win any division of STAR.

Is there a requirement on how the fish are caught?

Yes, all entrants must be caught on conventional hook and tackle (no electric reels) by the angler entering the fish.

What is eligible in the bank fishing division?

The intention of the division is to give anglers without access to any type of watercraft, the ability to win. Fish caught from a publicly accessible road, dock, pier or beach that was accessed by foot or automobile only are eligible. Private piers as well as areas only accessible to private landowners are ineligible. You cannot take any type of watercraft or plane to access fishing locations.

What is considered a fly for the fly fishing division?

The Red Snapper Division of the STAR tournament will remain open during the tournament as long as the federal for-hire season and the season set for private anglers by Louisiana Wildlife and Fisheries is open. This season is subject to close before the end of the tournament. All fish entered in this division must be caught while abiding by the regulations set forth by the Gulf Council and the State of Louisiana where applicable and based on time and location of catch.

THE 2021 LOUISIANA RED SNAPPER SEASON:The 2021 private recreational red snapper season will begin on Friday, May 28 in both state and federal waters. The season will run weekends only (Friday, Saturday, and Sunday) with a daily bag limit of two fish per person and a 16-inch total length minimum size limit.  The open season will also include the Monday of Memorial Day and the Monday of Labor Day. For more information, click here.

What condition of my fish is acceptable for weigh-in?

Your fish cannot be frozen, spoiled, gutted, altered or mutilated.